I have not had an actual website since 1990-something, I think. People have been nagging me to set something up again, if only just as a pile of links to things of mine that I have done, professionally.

I wear a lot of hats I guess, so, let me try and sort this out a bit.

Most of my recent output has been tabletop RPG writing. More monsters and optional class features than I can count for Pathfinder and Starfinder, of which these are some personal favorites:

I also designed the board game adaptation of Missile Command for IDW's Atari tie-in series, plus several other tabletop games I unfortunately can't provide links to at the moment.

Meanwhile as a side project, I'm tentatively working on a personal fantasy RPG campaign setting I might properly publish in the future, which for now lives in the form of a few notes scattered around my blog:

A lifetime ago I reviewed video games for a living, for a site that had really terrible archiving, a site that has since gone down, a couple print publications that no longer exist, and a lot of independently published articles on my old website which... might still have a surviving backup on an old hard drive somewhere? I do still have some broad essays about game design in general on my blog, mixed in with everything else I can provide some examples of at least.

Which you'll just have to take my word on (or enquire for a sample) because I don't have any samples I can publicly post here.

Again, thanks to the general entropy of the internet, most big formal articles I'd link here have been lost to time, surviving only in the form of 100+ post Twitter thread rough drafts, but there's a few presentable articles I can still link to, or at least meaty blocks of text with a lot of citations in them.

Specifically I have a Twitch channel where, without a particularly fixed schedule, I post a huge variety of livestreamed video games, most notably a project where I have been attempting to play every single game in my absurdly overstuffed Steam collection, with some breaks for full playthroughs of a few things, and the occassional several-hour Risk of Rain 2 session.

This will be a much nicer site to look at when I regain access to the drive with all the samples that aren't under NDA, but I do sometimes dabble in low resolution game art.

I Wrote this Ranma Thing

It doesn't really fit anywhere else, but I wrote this 4 part essay where I reread the entirety of Ranma 1/2 with a lens of looking for supporting evidence that the title character actually is trans, not just a cis dude with a weird curse, and it is just far and away the most-circulated post I have ever written. Also wow did that turn out to be an easier case to argue than I expected. I mean it's right there in the text, particularly this panel. 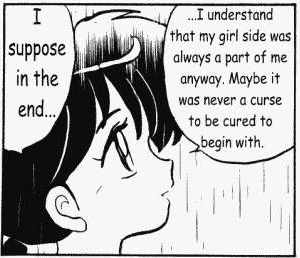 Thanks to a variety of factors, but mostly the terrorist stalkers one has to deal with when writing the sort of journalistic content linked above, I am actually in a really precarious place, financially. Bad living conditions, no steady employment, increasing difficulties finding freelance work, and some really serious health problems all add up. So, I'm generally always willing to take what work I can get. Feel free to e-mail me, if you want to rol the dice on it not being a day where my e-mail is being DDoSed and overflow deletes your message before I ever see it. Alternatively, if you want to more reliably contact me, I really hate to say it, but the best way at the moment really is to just message me over Twitter to get my attention and then continue the conversation via direct message and/or whatever backup e-mail solution is working for me that day. Which is terrible, I know, but I am constantly besieged and it's the most stable option on the table sadly.

You're also of course more than free to cut out the middleman of having me write something for pay, and just donate to me via Patreon.